May 12th, 2009   •   no comments
David Beats Goliath More of the Time Using These Strategies Malcolm Gladwell, author of Outliers and Blink, writes in The New Yorker on

how the underdogs win battles, basketball games, simulated water wars.  What lessons from these illustrations can we apply to the business world?

In Goliath’s time, duels with Philistines were a formal affair: they began with the crossing of swords. David, a shepherd, “came at Goliath with a slingshot and staff because those were the tools of his trade.” He brought a shepherd’s rules to the battlefield.

A young girls’ basketball team in Redwood City, California — while not as talented or as tall as their competitors — used the “full court press” to bewilder their opponents 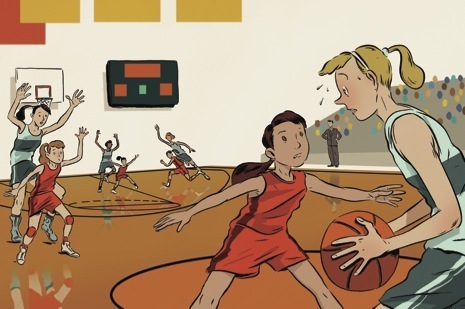 and force them to make more mistakes.  The smaller girls would steal the ball and, then, make high-percentage layup shots.

Their Coach, one of the girls’ dads, cricket and soccer player and new thinker/software pioneer, made his analysis: It was as if there were a kind of conspiracy in the basketball world about the way the game ought to be played, and Ranadivé thought that that conspiracy had the effect of widening the gap between good teams and weak teams.

Thirdly, a computer scientist named Lenat developed an artificial intelligence program to help win a war game competition. What he found proved to be “socially horrifying.”

But, Eurisko didn’t have that kind of preconception, partly because it didn’t know enough about the world.” So it found solutions that were, as Lenat freely admits, “socially horrifying”: send a thousand defenseless and immobile ships into battle; sink your own ships the moment they get damaged.

Detective of fads and emerging subcultures, chronicler of jobs-you-never-knew-existed, Malcolm Gladwell’s work is toppling the popular understanding of bias, crime, food, marketing, race.  What does his theory about “socially horrifying” tactics tell us?  That there are “gentleman’s rules” by which all competitions engage?  That there are tactics, while valuable and effective, which can be repugnant?

Some would just call this stuff, these “inappropriate” methods  “out of the box” thinking.  I’d be in that court; time for some big change.  Break the norms.

The visual arts shreeve, a, baldwin, j and farraday, g variation in student conceptions of assessment, in c rust ed